Based on the Captain’s report. My thanks to Mike Bee of the HMS Penelope Association for his assistance

HMS Penelope was build by Harland and Wolff, in Belfast in 1936. Launched 15th October and commisssioned on November 13th 1936.

With a displacement of some 5200 tons and armed with six, six inch guns in three turrets and eight, four inch and an array of 20 and 40mm anti aircraft guns and with a top speed of 32.25 knots, she could hold her own in most circumstances.

She arrived in Malta on the 9th of September 1939 joining the 3rd Cruiser Squadron of the Mediterranean Fleet. By 1940 the Penelope was back in the European theatre where she saw action in the Norwegian campaign and around Iceland. The cruiser returned to Malta with HMS Aurora on the 21st October 1941 where they joined Force K. In December she was slightly damaged when the force found itself in an enemy minefield off Tripoli and went into dry dock in Malta, returning to active service in December. More actions followed but by this time the Germans were making it impossible to have surface ships in the harbour in Malta now that they had new air bases in Sicily. A number of ships were sent to Alexandria and others to Gibraltar, including the Aurora the sister ship to Penelope.

On the 25th of March the combined German and Italian air force commenced a heavy and concentrated attack on the Harbour. Bombs fell all around the Penelope but on the 26th whilst lying at Hamilton Wharf, she was damaged by near misses forward and aft from JU88 dive bombers. The blast near the bows caused flooding below the two forward mess decks and lifted the deck which strained the watertight doors. The damage aft also flooded some compartments putting A and B gun turrets out of action.  The after superstructure was also damaged. On the 28th The Penelope went into No.4 dry dock. The ship was camouflaged and pumping out the flooded compartments commenced. All the time the air raids continued. Once the dock had been pumped out it was possible to assess the full extent of the damage to the hull. The keel plate had been bent upwards for a distance of 30ft in a dent 6 to 8ft deep and the plate cracked for some 12ft. The authorities decided that it was not safe for the ship to remain in dock for the four weeks it would take to repair the damage so it was decided that she must sail as soon as the dockyard were able to get her sea worthy. A first aid plan was put in motion. At one stage the dry dock caissons caught fire, if they had given way, the Penelope would have ended up smashed and probably hundreds of feet beyond the end of the dock from the force of the water entering the empty dock. On April 3rd the enemy turned their attention on the Penelope, it was obvious that sooner or later she would get a direct hit, so everyone on board set to assist the dockyard workers in getting the ship ready to float. After the early morning raid, the Captain sent for the padre saying “we have a drinking song, we have a hunting song, we need a shooting song.. Can you compose a simple tune and simple words, as crude as you like.” An hour later it turned up and was approved. The Marine Bandmaster orchestrated it and at dinner time the crew were piped aft and with megaphone in hand, the Captain climbed onto the after gun turret and led the crew in a rousing singalong with the words written on a blackboard. 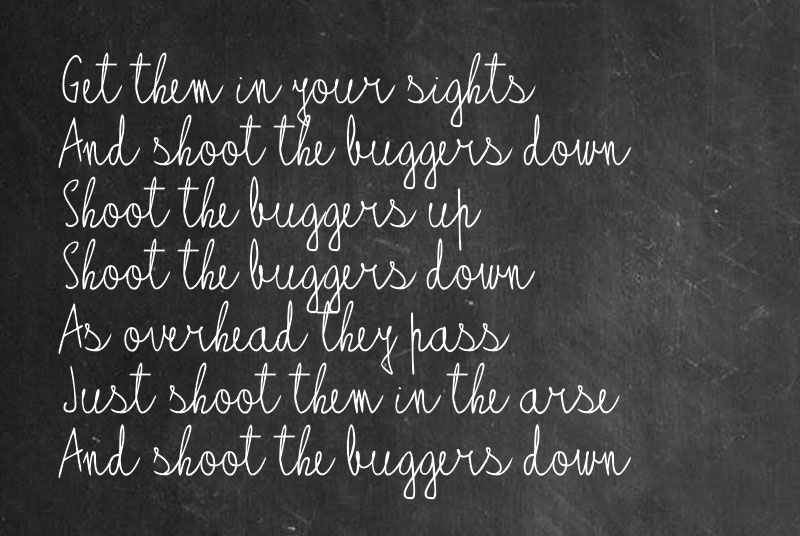 The song was an immediate success and could be heard around the ship with some unprintable variations.

Next day a bomb damaged the dock caisson and it began to leak and unfortunately the dock pumps were out of action but they were restarted that evening. Another bomb hit the dockyard wall and another hit a building close by hurling masonry onto the quarterdeck. On the last attack of the day a bomb hit the port bow and exploded under it. The port side of the ship was peppered with holes made by the masonry. The propellers were damaged, fire started in the Captain’s store and some of the after cabins.

A call for help went out to the army for welders who promptly answered the call. The dock was beginning to fill up and the ship was in danger of coming off the blocks on which she was resting on the dock floor, fortunately the pumps got going just in time.

The 4inch guns on the ship were wearing out and premature explosions had cost the life of a gunnery officer but there was no time to change the barrels.

The situation was desperate and so it was decided to flood the dock and make a dash for the open sea under cover of darkness. The plan was put into operation but as the dock flooded leaks began to appear but as a raid was in progress the dock continued to fill.

The Penelope started to float as she cleared the blocks beneath her. There was no turning back. At 3.45am re arming commenced but by 8.30am a mass attack started. A bomb hit the starboard brow making even more holes in the starboard hull. Only the more serious damage was repaired the rest were plugged with wooden stoppers. All the time the 4inch guns were in action, but there was a shortage of anti aircraft ammunition so there was nothing left for the voyage. After a hairy fuelling operation a call went out for some 4inch and Pom-Pom shells which was answered from all the ships in the vicinity and five hundred 4inch and other ammunition was loaded. The lower steering compartment was flooded but it was decided to sail anyway.

The cruiser left harbour at 9.15pm on the 8th of April heading for Cape Bon. The holes in the hull were still causing problems. Water was raising six feet above the forward platform deck so measures had to be taken to counteract this extra weight which was causing a list to starboard so some of the heavier gear was thrown overboard. That day the Penelope was attacked by bombers and torpedo aircraft but they were fought off without further damage. By this time they were down to 80 shells. The ship was difficult to steer due to the flooding of the lower steering compartment but use of the engines helped to keep the ship more or less on course. On April 10th the Penelope entered Gibraltar. Because of all the flooding and damage the accommodation areas were unusable so everyone was billeted ashore.

The Penelope had already received a number of messages of congratulations in the past for their actions in the Malta conflict and received the following in Gibraltar the day after arrival from the Vice Admiral Malta. “True to your usual form. Congratulations.”

She entered No 2 dock on the 11th of April and stayed there until 9.30am on the 9th of May 1942. The damage was so extensive that it was decided to carry out essential repairs in Gibraltar and then cross the Atlantic to the New York Navy Yard where she could be completed refitted. The Cruiser left Gibraltar on the 10th of May 1942

While in Gibraltar The Duke of Gloucester, as First Sea Lord, who had originally laid the ships keel, visited the ship and saw the Captain in hospital, following wound he received in Malta, where he congratulated him on his safe arrival in Gibraltar.

By its very nature and as a fortress, Gibraltar’s walls were for centuries an essential and…

In 1967, the Post Office issued a set of stamps depicting ships that had connections to…

By its very nature and as a fortress, Gibraltar’s walls

In 1967, the Post Office issued a set of stamps