If it’s not sport or another hobby it could well be music. So guitar, piano, drums or even violin or cello, would be first choice… but bagpipes? Some say they sound like a cat in terrible pain! However, there are those who are fascinated by the bag producing a humming drone!

But in fact, it was a more conventional instrument that first attracted musician John to the world of music. “That’s right, I was six years old and I remember watching a scary series on television and then one evening, a piano that I had been bought began playing all on its own! That terrified me.” Eventually, the puzzling event was solved as John recalls the mystery piano player happened to be a mouse running around inside. The resident musician removed, he started teaching himself to play, but never learnt to read music. That was John’s introduction to his chosen hobby which happened in a strange way, to say the least. Like most youngsters, pop music was the genre to get into with friends, so forming or joining a group was an obvious next step. At 13 he joined a group, coming together with some friends (by then playing guitar), later switching to his keyboards performing with more established bands like Jade, The Mockingbirds, Los Peninsulares and of late, gigging with the New Shadows for a while, experiencing an assortment of styles which can only be useful for your own development. 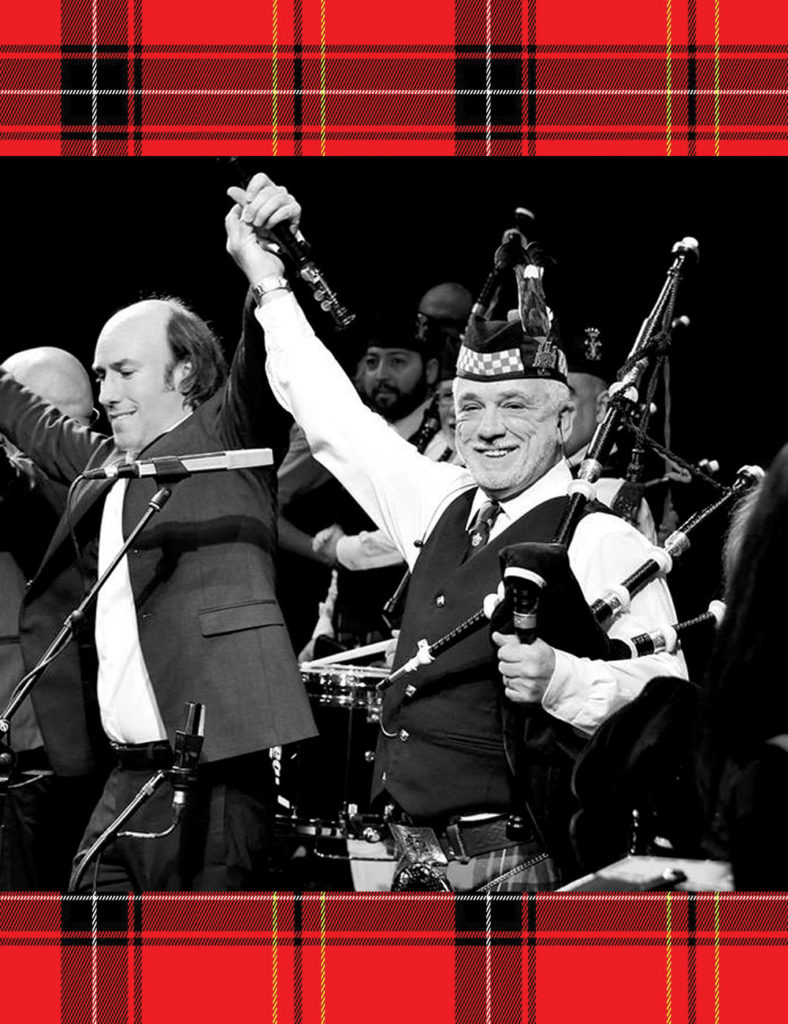 So how did the love of the whining, musical instrument materialise? Well, the Rock’s military history has meant there have been several military regiments stationed here – many with their own marching bands, amongst them bagpipers. “There was one particular bandsman known as Rob Roy of Tobruk and he really got me interested in the instrument. We also had the Sea Scouts Pipe band on the Rock, so I quickly joined the 5th Sea Scout Group mainly to learn to play the bagpipes and join the band. Tony Galliano – a top piper – took me under his wing and taught me all about the instrument, and to this day we still play together at many functions.” John, who also plays the penny whistle and harmonica, was in his early teens when he became a Sea Scout piper and so the task of keeping the bag full of air began and that’s continued to the present, keeping 58 year old piper John’s lungs busy I’m sure!

Some historians claim bagpipes originated from ancient Egypt brought to Scotland by invading Roman Legions. Others claim they came over from Ireland by Scots who had colonised Ireland. John tells me the Celtic music played on a variety of bagpipes can be found in Ireland, Wales and Cornwall – as well as Scotland – also in the North of Spain, Asturias and Galicia and I’m sure in many other countries too, importantly keeping their folk traditions alive. John really admires Carlos Nunez, a famous piper from the north of Spain, who performs the world over and with whom John as had the pleasure of performing with. Hevia is another top instrumentalist of the bagpipe genre keeping the trend alive. From time to time our Bagpipe enthusiast is called upon to perform at weddings and other functions on the Rock, across the frontier and further afield at other important functions with the Sea Scout Band, with bagpipe veteran Tony Galliano and as a soloist. “I’ve played in many places in those different combinations. We’ve played in London, Scotland, performed with the Algeciras Symphony Orchestra a couple of times, at the re-enactment `Battle of Albuera’ in Badajoz, at a launch of a new whisky – ‘born in Scotland and raised in Jerez’ – at the Gonzalez Byass Estate, playing on a 44kms trek (almost non-stop from 8am to 3pm), and with the Chichester Essential Services representing the Gibraltar Security Police (now GDP) which I was a member of. As well as here on the Rock, with the Re-enactment Society and the new Gibraltar corps of Drums Association, for members of the Saudi Royal Family in Marbella and in Morocco attending the `Fiesta del Rey de Marruecos’ (King of Morocco festival) and I’ve even played at a wedding in Barcelona!” But it doesn’t end there, `John the piper’ has been asked to play solo at other military concerts and recently he performed at an event which would probably go down as a highlight of his bagpipe playing career. “That was a scary event for me. I was contacted by The British Consulate in Sevilla who invited me to play at a football match. At half-time, I stood in the middle of the Sevilla Football Club ground during a first division match – Sevilla v Real Sociedad and I played a medley of tunes for a few minutes to a crowd of about 38,000 fans who clapped and cried out when I finished performing, and what took me by surprise was that after the match, Sevilla’s top players were asking to have photos taken with me and my pipes – instead of the other way around – which was amazing.” Oh, and he’s also played with – for those who remember – The Smith Family musical group who were very popular on the Rock three or four decades ago. But strangely enough, for a lover of the bagpipes and having already visited Scotland, John has never been to the Edinburgh Tattoo to which he has now firmly decided to book a flight for himself and wife Terry – who supports John’s love of the instrument – and attend the world famous spectacle.

Bagpipes are difficult to learn, John tells me. “You have to learn to control the pressure, keep the `bag’ full of air, blow that air into the `blowpipe’ as you play the notes on the `chanter’ producing that unique sound through the `drones,’ add to that, if you’re a member of a band, keeping in step whilst marching! A decent set of bagpipes can cost upward of £800 and are not difficult to look after, applying a little almond oil from time to time. In the meantime, recording a second CD is on the cards for John now, also the wedding season is upon us so there are more bookings there and no doubt, judging by the variety of engagements he’s been invited to perform at so far over the past months and years, who knows… perhaps a gig at the much loved Edinburgh Tattoo?

Whatever happens, the sound of the bagpipes arousing stirring emotions of Scottish laments or the happier Irish tunes will continue to be part of John’s performances in full regalia or other attire. I rather like, `Scotch on the Rocks! Can you do that one?’

The Christmas card's origins are hard to pin-down exactly, but the first recorded ones can be…

This poetry collection is highly autobiographical, and as raw and emotional as it gets. It has…

Jodi Picoult has been one of my favourite authors for as long as I can remember.…

The Christmas card's origins are hard to pin-down exactly, but

This poetry collection is highly autobiographical, and as raw and