In what has been described as a unique, multidisciplinary sporting spectacle and as a scaled-down version of the Olympics, the Island Games is coming to Gibraltar this month between the 6th and 12th July.

Over 3,000 coaches, athletes, officials and spectators will be descending on Gibraltar from all over the world to take part in The Gibraltar 2019 NatWest International Island Games XVIII at some fantastic new venues with the Rock as the backdrop.

This is only the second time that Gibraltar has hosted the Island Games, the first being in 1995 when it was dubbed the ‘Sunshine Games’, but it will be a once in a lifetime opportunity for many to watch international athletes competing on their home turf, and the good news is that apart from the Opening Ceremony, entry is free to all events.

The games started in 1985 as the Inter-Island Games, part of the Isle of Man’s International Year of Sport, which saw fifteen islands with 700 competitors and officials taking part in seven sports. Initially only meant to be a one-off event, the festival was such a success it was agreed to hold it every two years. President of the Gibraltar Island Games Association, Linda Alvarez, has been involved with the Island Games since 1987 when she participated as an athlete playing Badminton in Guernsey, and has been involved in the organisation of the Island Games ever since.

I remember the Games from the last time they were held here and the euphoria surrounding them, and I am hoping for the same atmosphere this time around,” Linda comments. “The Island Games will be a really good thing for Gibraltar and I think particularly in these times of uncertainty that we are facing, it is great that Gibraltar can prove to Europe and to the rest of the world that we are not just a small place but that we can do big things

The Island Games Association consists of 24 islands and to apply to join, an island has to be under a certain size to become a member. Linda explains that when the Games first began there had been a call asking for islands to participate. “Although we are not an island, it was a great opportunity for Gibraltarian athletes to participate, particularly in 1985 when the frontier was closed, and because up until then we could only compete in the Commonwealth Games,” she says.

This year there will be 22 competing islands coming from as far north as Greenland, as far south as St. Helena and the Falkland Islands in the Atlantic, and including the Caribbean Islands of Bermuda and the Cayman Islands.

The 14 sports consist of athletics, badminton, basketball, cycling, beach volleyball, shooting, squash, swimming, table tennis, tennis, judo, ten-pin bowling, triathlon and sailing. “Six new venues have been built just for the Games, which will obviously be part of the legacy for Gibraltar, and the rest of the venues have been revamped,” Linda states.

Sustainability is the word, and Gibraltar is leading the way as an example to the world by reducing its environmental impact during the Island Games with campaigns that will benefit the whole community. All the new facilities have been constructed in an eco-friendly way so as not to negatively impact the environment or heritage, featuring green roofs and solar panels.

“We want to educate and inspire the younger generation,” Linda says, “and right from the beginning it was my idea that I wanted to go single use plastic free.” With that in mind Linda decided on a dolphin as the mascot for the Games. “We held a competition with GBC Radio to name the dolphin and the winning name was Hope, which is very apt as it goes nicely with our slogan which is ‘Clean seas, our future’.”

Main sponsors for the Island Games, Nat West International, are providing each athlete with an aluminium bottle and Agua Gib will be installing fountains all over Gibraltar, particularly in the sporting venues, so that people can easily refill their water bottles.

Linda explains that just as the Olympics has a flame, the Island Games has a similar concept but with water as a symbol of the oceans and seas surrounding the islands. “The water ceremony, the now traditional curtain-raiser to the Games, will take place at the Opening Ceremony at the Europa Point Stadium,” she says. “Every island in attendance will bring water and pour it in the ceremonial fountain which will circulate until the closing ceremony, when a sample will be handed to Guernsey, the 2021 host,” Linda says. 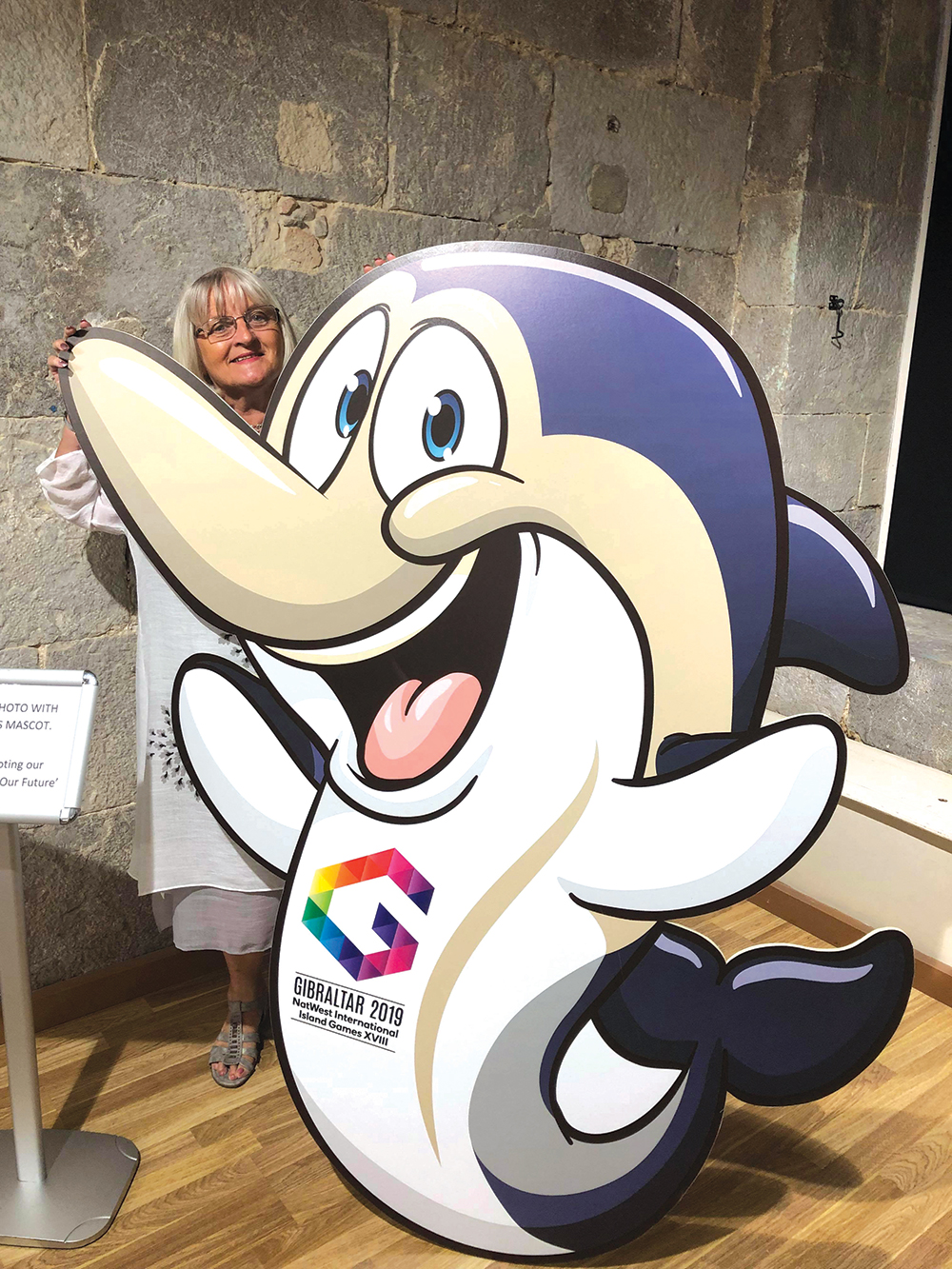 It goes without saying that the fountain is going to be made from reusable recyclable material, the podiums are being made out of wooden pallets, and even things like the flag poles will be made out of old broomsticks. “Wherever we can we are trying to be sustainable,” Linda comments. A further lasting legacy will be the tree planted in Alameda Gardens, and to celebrate the event there are ten commemorative stamps featuring various sports.

“Minister for the Environment, Dr John Cortes, is hosting a Green Islands conference for member islands before the games to discuss environmental issues,” Linda reveals, “and there is going to be a lovely exhibition in Casemates run by the Department of Culture in conjunction with the Gibraltar Chronicle showing the history of the Games.”

There are a whole host of special events for everybody to enjoy taking place during the week of the Games to be held at Grand Casemates Square which will be named ‘Games Square’. These include a special edition of gastronomic food festival ‘Calentita’ to be held on the 5th, the eve of the Games’ official opening and also a selection of live entertainment during ‘Summer Nights’, which will take place on a daily basis from Saturday 6th to Saturday 13th.

“We will have a stage in ‘Games Square’ where medal presentations will take place every evening, ensuring that locals and visitors alike can get involved in the friendly ambiance,” Linda confirms.

The aim of the Island Games is twofold,” Linda tells me. “Firstly, the whole reason it was started was to give athletes from islands opportunities to experience participating in different sports, and secondly to build up some sort of legacy for the islands.” Linda gives an example of the legacy from the 1995 Games. “We built the GASA swimming pool which is still used by the public, and this time we are going to have new shooting ranges, new athletics track, a 50m indoor swimming pool at Lathbury Barracks and a completely new stadium at Europa Point –all venues that can be used in the future by local people and to enhance a sports tourist industry that will bring more visitors and revenue into Gibraltar – so the legacy that this Island Games is going to leave behind is going to be huge.” 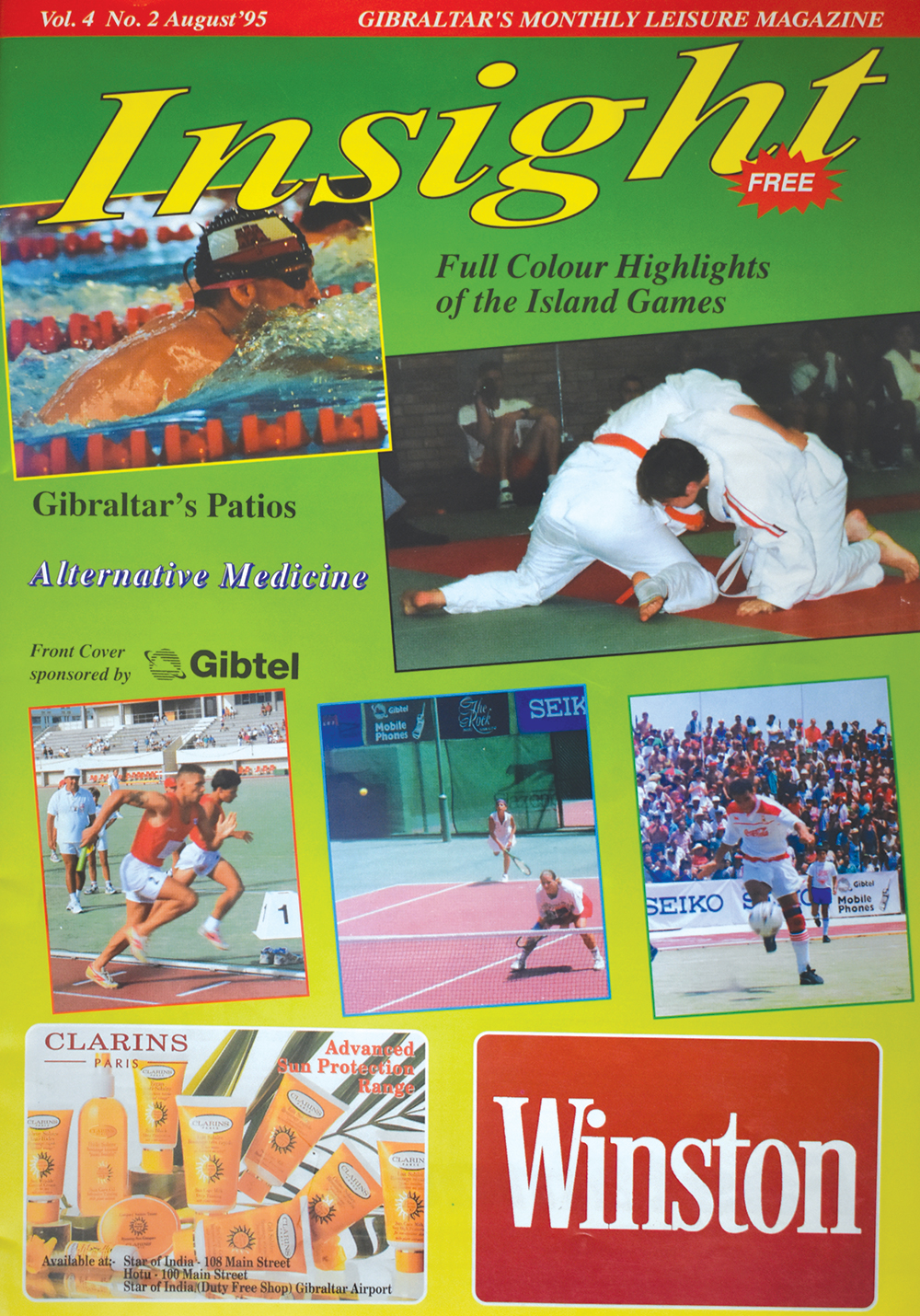 Accommodation for athletes will be dotted around Gibraltar at various locations including the new University student block at Europa Point. “The hotels have been very good and given us around 700 beds and the former MoD property at Europa Walks will house about 1,200 people. The ‘Games Village’ will be housed there and the old St. Christopher’s school site has been transformed into the athletes dining area. There will be a transport link from the venues to accommodation areas so that accredited athletes will be able to hop on and off buses branded with the Island Games logos at special bus stops that won’t disrupt local transportation.

As a retired teacher, Linda knows that in this day and age it is all about trying to get kids out and about instead of sitting there playing with their computers. “Gibraltar has a high uptake of youngsters taking up sport and something like this can encourage even more to do so,” she comments. “I have been going round to all the schools giving presentations and lectures to try and get the students involved, and this is yet another part of the legacy that we need to leave behind.”

Over five hundred local people have signed-up to volunteer as ‘games makers’ to help out with the organising and running of the Games during the week-long event. “We had a fantastic response to our call for help, which is amazing, and from past experience I know that the volunteers make a real difference whilst thoroughly enjoying themselves at the same time,” Linda says.

“I can’t state this enough, but it is thanks to the Government and all the different agencies working together in the areas of security, transport, culture and customs that will make this Island Games a truly great success.”

After many sleepless nights, challenges and all the days of hard work that have gone into the huge undertaking to complete everything and make it operational for the start of the Games, Linda is sure of one thing. “It is going to be very exciting,” she remarks. 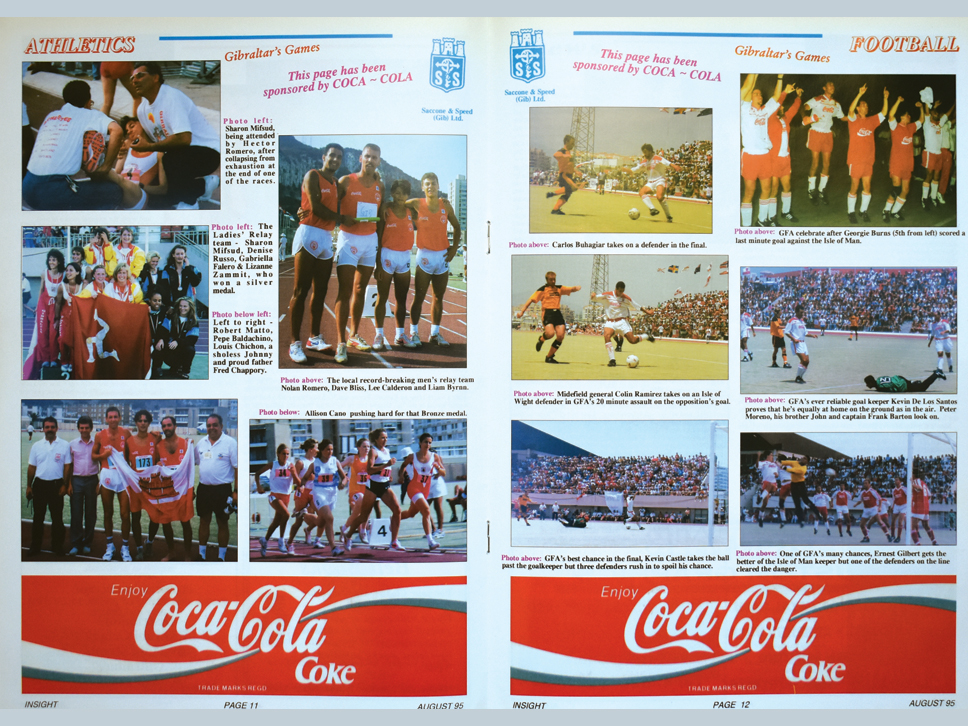 Gibraltar’s Referees and match officials held their annual five-day FIFA Winter Camp, in January, on the…

Gibraltar Rugby travelled to Bermuda in October to fulfil the delayed return match against Bermuda Rugby.…

Gibraltar Rugby travelled to Bermuda in October to fulfil the delayed return match against Bermuda Rugby.…

The seasonal shift into spring is symbolic of rebirth and renewal, and…

Gibraltar Rugby travelled to Bermuda in October to fulfil the